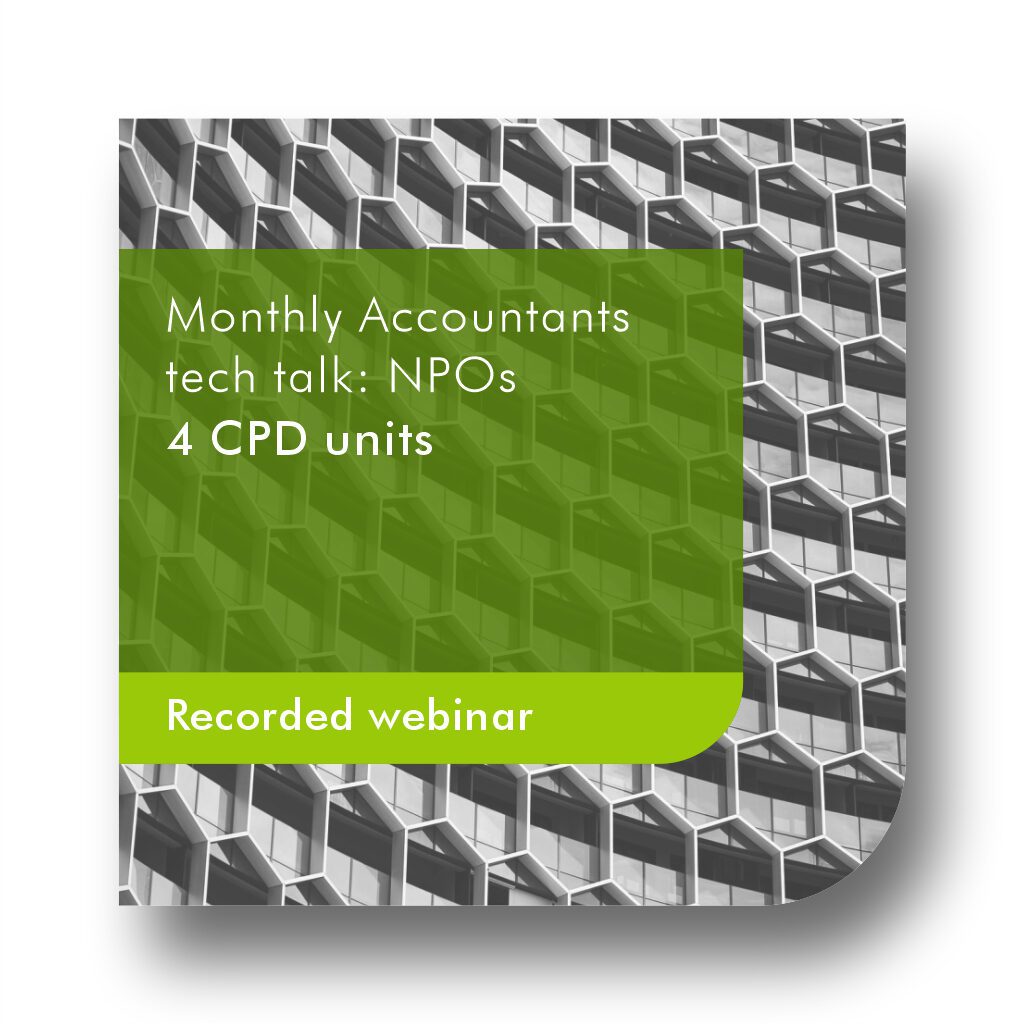 This event will discuss NPO’s and all the compliance information accountants need. August 2022

What you will learn

By the end of this event the attendee should have the following competencies:

The non-profit sector is currently irritated and civil society organisations have called for the withdrawal of the draft Non-Profit Amendment Bill 2021, citing concerns about how the proposed changes will impact the operation of NPOs.

Every single practitioner is involved in a non-profit entity to some extent or the other – whether this involvement comes through membership of a sporting club, charity, or religious organisation. These associations are often run on a volunteer basis, leaving the compliance to be an afterthought.

There are no preconditions for this course.
Moderate level.
Recorded webinar made available on a specified date

Caryn Maitland is a Chartered Accountant (SA). She has been a member of IRBA as a registered auditor and accountant since 2002.

Caryn has lectured Auditing and Accounting at various institutions and has conducted independent workshops and seminars for professional accountants since 2006 on various topics. She has presented on the national tour for the annual Legislation Update with ProBeta Training (Pty) Ltd in 2014 and 2015, as well as on the FASSET national tour for the Tax Administration Act in 2014.

Carmen Westermeyer graduated in 2001 from the University of Natal, Durban (now UKZN), with a BCom Honours degree in Accounting and completed her articles with PwC in 2004. She has been a member of SAICA since then. In 2008, she was appointed lecturer at UKZN and coordinated the Taxation 300 course until December 2010. She then took over the role of Academic Leader for the Taxation Department, as well as the coordination of the Postgraduate Taxation Programme.

In December 2012 Carmen started running ad hoc training courses for members of the profession. From December 2013, she moved into commercial training and consulting on a full-time basis. She has been involved in various training activities, such as the FASSET Budget and Tax Update in 2015 and 2016.